This page introduces additional topics that may be useful to understand if you want to prevent rioting from starting and spreading throughout your empire. If you haven't already, you might want to take a look at the Getting started page first.

The topics in this article, incidentally, are all new in v0.2.0. 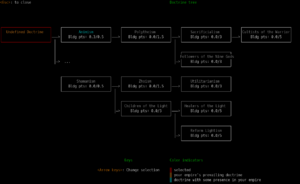 Doctrines are the lens through which your citizens will view your empire and can either be a source of happiness or anger. This will depend, in part, how consistently your rule is with the empire's prevailing doctrine.

While you do not control the doctrines your citizens adhere to, you can play a heavy role in shaping them by the buildings you create around them. The closer one lives to a building dedicated to a particular doctrine, the more likely they are to adhere to it.

As of v0.2.0 you cannot change or remove buildings. This is half intentional. Once you create buildings and dedicate doctrines to them they will be there and will influence your empire's culture as long as your empire lasts. Or occasionally, until a rioter destroys it.

Similar to the technology tree, there is a doctrine tree. Unlocking a doctrine requires obtaining enough buildings that have dedicated themselves to the doctrine. Residential buildings will often dedicate their buildings to a doctrine when other buildings near them already have such a dedication. Some doctrines unlock new buildings. Some unlock new doctrines. And some do both.

The prevailing doctrine does not have to progress through the doctrine tree. It is only the majority doctrine. It can go forward or backward through the tree. 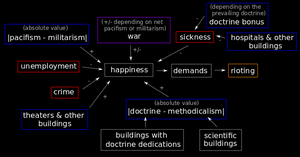 The many sides to happiness.

There are many reasons why someone would decide they are unhappy with you or your empire. One of the first signs you will see that people are not happy with you is when they start demanding you take specific actions. It is not always the case that the people know what is best for themselves so pay attention to what they are saying, but with a mind toward skeptical inquiry. Additional measures and insights you can get into sources of unhappiness are public polling and your civic advisors, both accessible via the View menu. Public polling being a somewhat more direct measure, but also one that may be delayed. It can take time for your residents to recognize and appreciate what you might be doing for them.

One of the common sources of unhappiness is unemployment -- market places are one of the more direct ways to help this. Attempting to tax residents higher than business and other zones can also, sometimes, help.

Remember, unlike you, your advisors and your citizens do not think outside the box. Think not only about why people are unhappy, but also ask yourself why would they be happy? Give them something to be happy about.

It can be difficult to turn things around when riots start to break out and they can sometimes spread into every city in your empire. You should generally try to avoid letting things get to this point in the first place because public opinion is a large and slow ship to turn. One way to not deal with rioters is with your military.

While all the advice in the previous section still applies here, an additional word of advice is to think more extremely in more extreme times. By this I mean, take whatever slight dispositions you believe your empire has even further. If you've been running with no doctrine and only science, or vice versa then focus more on this even more so. If you've been running with doctrines that encourage militarism or pacifism, go further if you can (declare more wars, or get out of any wars you're in, if you can). People want drastic change when they riot, so give it to them.

Take a look at some of the boxes in the diagram above if you want to see *why* this approach could work (it's because of the absolute values--equal amounts of doctrine and methodicalism means they cancel and give no bonus but all of one can give a substantial bonus).